The National Parks Service recently issued a press release and posts on social media about three wolves killed during Montana’s hunting season after they left the boundaries of Yellowstone National Park. As is typical, mainstream media outlets picked the story up and repeated it verbatim, while social-media keyboard warriors screamed about the inhumaneness of any type of hunting, the ability of wolves to intrinsically manage their own populations (along with many other biological fallacies) and the overall irresponsibility of Montana, hunters and scientific wildlife management.

What’s irresponsible, however, is the National Parks Service issuing that release in a vacuum of information, essentially throwing gas on fire that’s been raging for decades. Do park officials issue a press release disparaging scientific wildlife management when elk, bison or other game animals leave the park and are killed during regulated hunting seasons?

No, they do not. When it comes to other game animals, Yellowstone acknowledges the need, effectiveness and merits of scientific wildlife management. Take bison for instance: 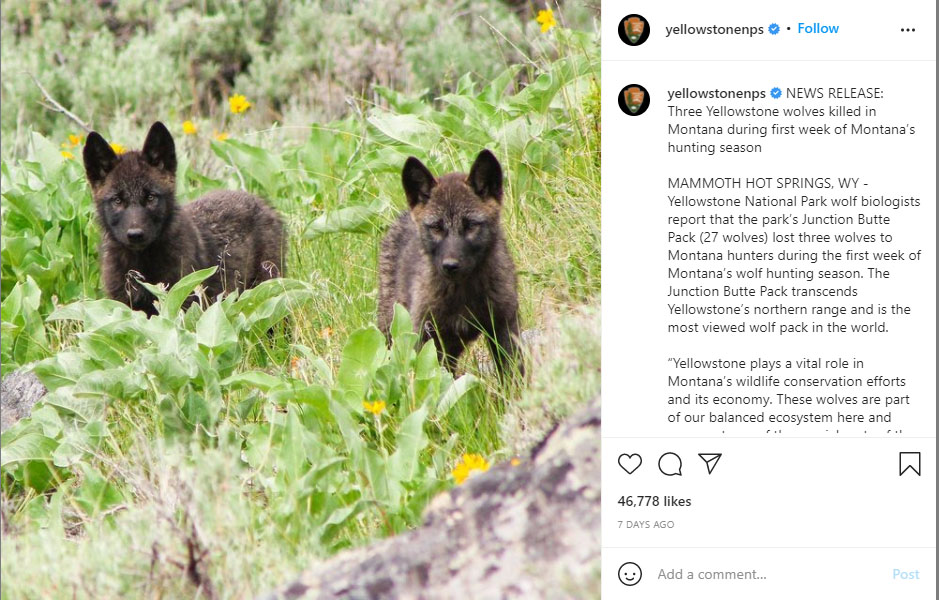 What makes wolf management any different than that of bison?

Yellowstone National Park isn’t a zoo. It doesn’t exist in a vacuum, and neither does the science or facts supporting wolf management. Wildlife, including wolves, are managed at the population level, not at the individual level. Wildlife management accounts for environmental variables, as well as natural and human-caused mortality among many other factors. Nature is inherently setup to deal with death. That’s why animals have litters, lay multiple eggs and spawn dozens of fry at once, and why breeding seasons are staggered throughout a wide range – it’s all about maximizing survival rates.

The human desire to name individual animals or anthropomorphically identify with family units does a grave disservice to wildlife management and the animals themselves. And Yellowstone National Park is complicit in humanizing wildlife and conflating several issues while ignoring the science and life outside of the park when it comes to wolves in order to justify their own biased interests.

The mere fact that the Junction Butte pack was comprised of 27 wolves suggests an unnatural, easy life within the park. Outside of the park, wolf packs average 6 to 10 animals, with a large pack around 15 animals. It’s extremely rare, and only under the best circumstances, that a pack reaches nearly 30 animals.

More facts from a well-written piece in the Colorado Sun that dispel the insinuations of mismanagement of wolves coming from Yellowstone officials:

It’s high time Yellowstone National Park stopped politicizing the wildlife management of one species over others. While the park cites vague “tens of millions of dollars” spent in Montana communities by parkgoers, these people are there for the Yellowstone experience, and are not just wolf watchers. In contrast, Montana sportsmen spend a verifiable $56.3 million on just hunting and fishing licenses (sportsmen spend $41.7 million in Idaho and $32.8 million in Wyoming), not counting dollars to gateway and rural communities where they stay, gas up, buy groceries and other supplies.

The management of wolves is no different than any other species. Issuing inflammatory press releases to gin up media coverage of a divisive topic does a disservice to wildlife management, biologists and the preservation of conservation.

Find out what issues our Government Affairs department is currently battling to protect your outdoor heritage.
END_OF_DOCUMENT_TOKEN_TO_BE_REPLACED

By becoming a member of Sportsmen's Alliance you’re taking an important step to help protect and promote our outdoor heritage. Join today to create a powerful and unified voice for sportsmen across the country. END_OF_DOCUMENT_TOKEN_TO_BE_REPLACED