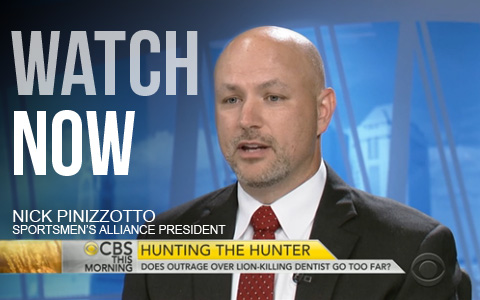 The impetus for Pinizzotto’s appearance was the national discussion surrounding the killing of “Cecil” the lion by Minnesota dentist Walter Palmer in the African country of Zimbabwe. And while the Sportsmen’s Alliance is privy only to the same information publicly available, Pinizzotto cautions against a rush to judgment based only on the few facts currently known.

“While the facts of the case are still coming in, we are certainly concerned by the reports. No respected conservation organization would condone poaching, but we are also concerned about the crazed rush to judgment we’re seeing play out in the media, by celebrities on social media, and animal-rights organizations. This mob mentality is simply unacceptable, and in some cases can even be dangerous as it escalates to threats of harm and even death,” said Pinizzotto.

Instead of focusing on the instance of a single lion’s death, in the full interview Pinizzotto discussed the role of sportsmen in wildlife management and habitat protection and enhancement. The positive economic, environmental and social impacts sportsmen provide throughout the United States, and increasingly the world, cannot be overstated, and the need to provide this messaging to mainstream audiences is fundamental to counteracting the impulsive, emotional mob mentality that overtakes social media and dominates headlines whenever an issue pertaining to hunting arises.
“It is disappointing to see hunting come under fire once again in the media, but it further illustrates the importance of ensuring that important facts about hunting and wildlife management are readily available to the masses,” said Pinizzotto. “Reasonable people who are given good information will be far less likely to let misguided emotion cloud their judgment about the importance of hunting to wildlife and conservation.”

Pinizzotto will continue the discussion surrounding the role of sportsmen in wildlife and habitat management in a 3 p.m. EST interview with Brook Baldwin on CNN.

Find out what issues our Government Affairs department is currently battling to protect your outdoor heritage.
END_OF_DOCUMENT_TOKEN_TO_BE_REPLACED

By becoming a member of Sportsmen's Alliance you’re taking an important step to help protect and promote our outdoor heritage. Join today to create a powerful and unified voice for sportsmen across the country. END_OF_DOCUMENT_TOKEN_TO_BE_REPLACED