On Oct. 3 more than 50 ranger teams from across Africa will run 21 KM to support conservation efforts. Here’s how you can help—even if you aren’t a runner. 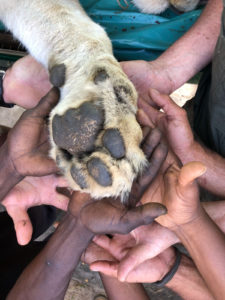 COVID-19 has impacted African tourism and hunting, which has decimated anti-poaching teams and threatens the work of conservationists worldwide.

COVID-19 has put a halt to tourism in Africa, and as a result poaching has increased. Without the necessary funds to maintain anti-poaching forces, many ranger units have been forced to limit patrols or shut down their anti-poaching efforts altogether. Reduced patrols allow poachers unfettered access to parks, reserves and other wildlife strongholds, and that has resulted in an unprecedented spike in illegal hunting in some of the world’s most vulnerable ecosystems.

This increase in wildlife numbers would never have been possible without donations from hunters, as well as the efforts of Coutada 11’s Zambeze Delta Anti-Poaching Unit. These rangers are charged with the dangerous task of rounding up and arresting poachers, and they do so by tracking on foot, from the air using a helicopter and on motorbikes as part of a quick reaction force. 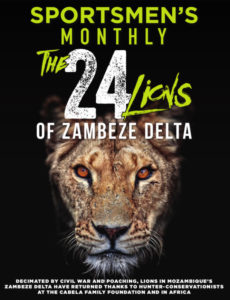 Read the story of “24 Lions” in Sportsmen’s Monthly!

The efforts of the Zambeze Delta Anti-Poaching Unit have paid off. In 2018, the Cabela Family Foundation and the Ivan Carter Wildlife Conservation Alliance joined forces to reintroduce lions to the delta for the first time since the end of Mozambique’s civil war. That project, known as 24 Lions, was a major success, and today there are more than 50 lions roaming free in Coutada 11’s millions of acres.

The lack of tourism and the funding it generates has caused a budget shortfall in Coutada 11 as it has across the whole African continent where much of the anti-poaching efforts depend on money generated by tourists and hunters. For that reason, Coutada 11 has fielded a team of rangers to take place in the Wildlife Ranger Challenge, a 21K (13 mile) race that will happen on Oct. 3, 2020. The money generated by this race will go directly to funding rangers in the Zambeze Delta so that they can continue their vital anti-poaching efforts. What’s more, the Tusk Trust will match 25% of every donation, ensuring that your dollars go farther to help protect African wildlife.

Find out what issues our Government Affairs department is currently battling to protect your outdoor heritage.
END_OF_DOCUMENT_TOKEN_TO_BE_REPLACED

By becoming a member of Sportsmen's Alliance you’re taking an important step to help protect and promote our outdoor heritage. Join today to create a powerful and unified voice for sportsmen across the country. END_OF_DOCUMENT_TOKEN_TO_BE_REPLACED